Dramatic increases in computing power have led to a surge of Artificial Intelligence applications with immense potential in industries as diverse as health, logistics, energy, travel and sports. As corporations continue to operationalise Artificial Intelligence (AI), new applications present risks and stakeholders are increasingly concerned about the trust, transparency and fairness of algorithms. The ability to explain the behaviour of each analytical model and its decision-making pattern, while avoiding any potential biases, are now key aspects when it comes to assessing the effectiveness of AI-powered systems. For reference, bias is understood as the prejudice hidden in the dataset used to design, develop and train algorithms, which can eventually result in unfair predictions, inaccurate outcomes, discrimination and other similar consequences. Computer systems cannot validate data on their own, but are empowered to confirm decisions and here lies the beginning of the problem. Traditional scientists understand the importance of context in the validation of curated data sets. However, despite our advances in AI, the one thing we cannot program a computer to do is to understand context and we consistently fail in programming all of the variables that come into play in the situations that we aim to analyse or predict.

“A computer cannot understand context and we consistently fail in programming all of the variables that come into play in the situations that we aim to analyse or predict.”

Since the effectiveness of AI is now measured by the creators´ ability to explain the algorithm’s output and decision-making pattern, “Black boxes” that offer little discernible insight into how outcomes are reached are not acceptable anymore. Some historical episodes that brought us all here have demonstrated how critical it is to look into the inner workings of AI. 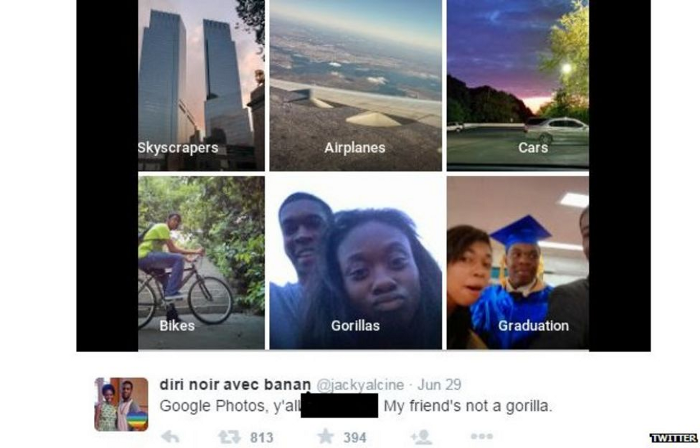 Mr Alcine tweeted Google about the fact its app had misclassified his photo.

The brand was under fire after its Photo App mislabelled a user´s picture. Jacky Alcine, a black Web developer, tweeted about the offensive incorrect tag, attaching the picture of himself and a friend who had both been labelled as “gorillas” . This event quickly went viral.

All these are examples of what should never happen. Humans can certainly benefit from AI, but we need to pay attention to all the implications around the advancements of technology.

For high volume, relatively “benign” decision-making applications, such as a TV series recommendation in an Over-The-Top streaming platform, a “black box” model may be seem valid. For critical decision-making models that relate to mortgages, work requests or a trial resolution, black boxes are not an acceptable option.

After reading in the previous 5 examples where AI is ineffectively used to support decisions on who gets a job interview, who is granted parole, and even for making life-or-death decisions, it is clear that there’s a growing need to ensure that interpretability, explainability and transparency aspects are addressed thoroughly. This being said, “Failed algorithmia” does not imply that humans should not strive to automate or augment their intelligence and decision-making, but that it must be done carefully by following clever and strict development guidelines.

AI was born to augment human intelligence, but we need to ensure that it does not evolve towards automating our biases too. AI systems should be deemed trustworthy, relate to human empowerment, technical robustness, accountability, safety, privacy, governance, transparency, diversity, fairness, non-discrimination and societal and enviromental well-being.

“AI was born to augment human intelligence, but we need to ensure that it does not evolve towards automating our biases too.”

This responsibility also applies to C-level leaders and top executives. Global organisations aren’t leading by example yet and still show no willingness or need to expose their models’ reasoning or to establish boundaries for algorithmic bias . All sorts of mathematical models are still being used by tech companies that aren’t transparent enough about how they operate, probably because even those data and AI specialists who know their algorithms are at a risk of bias are still keen to achieve their end goal rather than taking it out.

So, what can be done about all this?

There are some data science tools, best practices, and tech tips that we follow and use at Bedrock.

I will be talking about all this in the second part of this article as well as about the need for guidelines and legal boundaries in the Data Science & AI field.